Last Sunday I drove southwest on 59 from my home in southwest Houston into the suburbs, almost into the country. In Richmond, I exited the freeway and turned right, down a paved road, another right into a dirt parking lot. The gravel crunched beneath my tires, and I found a spot near a chicken coop. Through the poultry netting and in addition to chickens, I discovered peacocks. On the other side of the coop, sunlight shone down on baby goats with their mothers. Beyond all of that lies a beautiful lake with ducks on the water and then River Pointe Church. 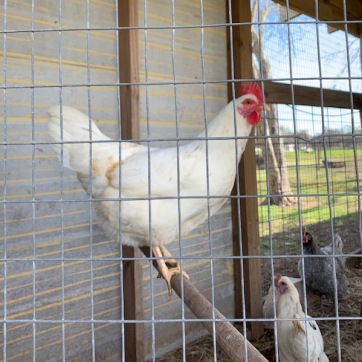 I always say, “You can choose HOPE, or not.” And churches and cathedrals, temples and holy places, farm animals and wide open spaces give me HOPE. I find God in these places—and myself, like the me I hope to be.

Life is heavy. I don’t believe any of us are exempt from challenges, but I do believe in the power of prayer. I keep a list of friends and family in my prayers for surgeries and illnesses, dependencies and dysfunctional relationships, the trials of life and inevitable death.

If the words above don’t lift you, go find words that do and places that do and people who do. You don’t have to believe everything you think, especially the bad stuff. And if you find yourself dwelling in the negative, find a new place to dwell.

Sidenote: A couple of weeks ago the pastor challenged us to read Samuel 1 and 2. These books contain the history of Israel leading into the story of David, as in the chosen-by-God David, who slayed the giant Goliath with his unwavering belief and a single stone. This same David later became king and committed adultery with Bathsheba who became pregnant. King David had Bathsheba’s husband murdered to cover up the sin. The sequence of events displeased the Lord, but King David confessed, and the Lord forgave.

Now, I am no bible scholar, and I don’t understand all of the wartime killing and all of David’s wives and concubines in the context of the Ten Commandments. What truly displeased the Lord was that King David took something that didn’t belong to him amidst everything he already had. Based on this temptation, David is probably the most relatable character in the Bible. (Hello, my name is human.) If an adulterer and a murderer can be forgiven, well then, there’s hope for you and me.

When I was young, my dad would always say, "Crystal, you can choose your attitude." One day I chose to believe him. View all posts by Crystal Byers